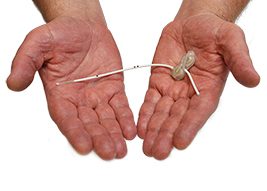 A Boston neurosurgeon recently avoided doing emergency brain surgery on a young patient just by pressing on a new device.

The Alivio ReFlow ventricular system was embedded beneath the scalp of the unidentified hydrocephalus patient.

Comprised of a subcutaneous “flusher” component and a ventricular catheter, the device has a “relief membrane” backup feature at the catheter’s proximal end. By pushing a button on the device, the first-in-human procedure cleared a clogged shunt that directs the flow of cerebrospinal fluid to the patient’s abdomen. The device received 510(k) clearance from FDA in 2017 as well as the CE Mark and is compatible with other manufacturers’ shunts.

Named for the Greek words hydro meaning water and cephalus meaning head, hydrocephalus is an abnormal accumulation of cerebrospinal fluid within brain cavities called ventricles. Part of each ventricle called the choroid plexus produces the fluid. Congenital hydrocephalus occurs in one or two per 1,000 live births, but the condition may also be acquired at any age.

About 50% of shunts in children fail during the first two years following implantation, usually due to blockages by tissue from the ventricles or choroid plexus, according to the Hydrocephalus Association. Such blockages can lead to emergency revision surgery, and many patients have had multiple revision surgeries, according to PJ Anand, founder and CEO of Anuncia, the maker of the Alivio system.

Anuncia has been overwhelmed by the response from parents and patients to the news of the recent procedure. One patient even asked to have the device placed prophylactically, according to the CEO.

Anand spun off Anuncia from his other company, Alcyone Lifesciences, earlier this year to allow the new firm to focus on devices for hydrocephalus. Lowell, Massachusetts-based Anuncia recently began working with Cincinnati Children’s Hospital on developing a plate to keep a ventricular catheter in position. Anand would like his company to develop a drug to eliminate ventricular catheter blockages but is happy for now with Alivio.

“We’re hoping that this will result in much more innovation going forward,” he said.